Autumn 2012, (1 year ago…) at the October edition of Jazzspinneriet, we were fortunate to be joined by Kristin Raknes (vocals), Thomas Nøkling (sax), Jan Erik Reknes (trumpet) and Torbjørn Hillersøy (bass) – 4 great musicians who substituted the regular band members who were busy doing gigs elsewhere. Theme for the concert was Autumn, and the set list consisted of regulars such as Autumn leaves and Autumn in New York, but we also selected tunes for my upcoming 40th birthday gig and used the concert as a setting for testing material for that.

Our version of Autumn Leaves opens with the g-minor section which can be heard in the early Miles Davis recordings, and is played in a very modest swing tempo.  Some delicate solos by Reknes and Nøkling, rounded off by my piano solo.

Kristin Raknes, who this time was backed by a trio, contrary to her previous appearance which was a piano / vocal duet setting. She did brilliantly two tunes by Kate Bush in their original key, and also a smooth version of the standard jazz ballad Cry me a river.

We continued by doing one of Thomas’ favourites, Sail away, a bossa tune with some interesting changes, a tune which we had not done before and which not very often can be heard at the Bergen jazz clubs.

Finally, we did Miles Davis’ Tutu. Floating around on the Internet are 2 accurate notations of the tune – (see Lucas Pickford’s below). At the solo parts, we copied Michel Petrucciani’s version and changed every now and then between Gm7 and Bbm7 at the choruses.  Some great solos by Jan Erik and Thomas, and solid backing by Jan Tore and Torbjørn.  My piano solo concluded the solos. 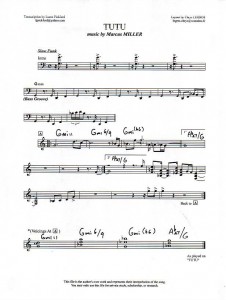