See previous posts about the lockdown that occurred in spring 2020 and how I used the time spent at home to study Ableton Live 10 at a well known music education institution. Below are my comments on assignment 6, which asked us to develop the ideas from lesson 5 into a composition. This was the second assignment of 3, which eventually lead to a complete composition which was worked on in terms of mixing and the use of spesific functions of Ableton. 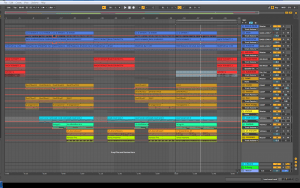 There is a strong motif presented in the opening, repeated in the mid section and coda. It’s based around the opening of Grieg’s string quartet in g-minor. I play two racks in unison with the original Grieg sample that is placed in a track on its own. These instrument racks feature two synts, two octaves apart, that are panned L and R by a value of 30 in the Instrument rack itself. The volume of this section is meant to be the loudest part of the arrangement. I found it difficult to develop the arrangement and the mix without a main vocal part. So I found in my 15 – 20 year old sample CD archive a CD from Best Service which features some generic rap vocals. I chopped up the vocals and assigned every phrase to individual pads in an Drum rack. That way I coud “play” the rap as MIDI events from my keyboard. The vocal is heavily foregrounded and centered. As to the rhythm section, the bass drum is foregrounded but the snare and high-hat are placed in the middleground as I want to have less heights in that department. Panned left and right by a value of 15 and placed in the background, are four choir samples placed on pads in a separate Drum rack. An arpeggiated phrase is panned left and placed in the background. Its more there to fill in empty spaces. A motif featuring my voice played through a vocoder setup is introduced to create a build up in the arrangement. It is placed in the middleground. To further create a build up, I play a short piano solo over 12 bars towards the end, and I play all elements in the background for that part. I realise that there is no obvious verse / chorus sections, and I will probably have to further contrast the different parts. Or – perhaps some effects will do?