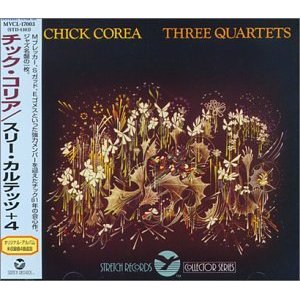 With Chick Corea’s upcoming 70th birthday (June 12th) in mind, our quartet will start focusing on the jazz legend’s compositions and add a number of those to our repertoire. Hopefully we will be able to celebrate Chick’s works in the same fashion as we did last year with Herbie Hancock’s tunes. By devoting time and energy to challenging musical material such as Chick’s tunes, we as a band and individual musicians will hopefully enjoy a learning experience with improved live performances as a result.

A tune which we have previously discussed and agreed that we all like, is “Folk song” from Chick Corea’s album “Three Quartets” (1981) featuring Michael Brecker, Steve Gadd and Eddie Gomez. The tune has a flavour of a nordic folk song, very melodic, with a contrasting “B” section of exciting modulations. Unison parts forced us to practice more than usual before attending the demo session.

My approach was to try to learn the changes by heart to be able to create a more or less controlled solo through 2 choruses. Prior to the recording session, I made transcriptions of Chick’s 1st choruses on the original studio recording and the one from the album “Live in Montreux” (1981). To my surprise, the melodic material of Chick’s solos appear to be very simplistic, based on the core material of the chord progressions, but played with a fluency which is so caracteristic of Chick. Intellegent phrasing, great sense of rhythm and clever playing through the chords, is typical of Chick’s solos on this tune.

The tune is available as a lead sheet, transcribed and published by Lucas Pickford on his website.

Our demo version of Folk song