During a weekend in late april 2008, I brought my audio pc to Studio Bergen to do my first ever demo recording using Cubase SX 2.2 and the Creamware Scope DSP system. Having invested in a 8 x 8 Luna break out box, my system was capable to record and playback 8 tracks simultaneosly. We used  a Yamaha mixing console for pre amps and routed the signal from the insert outs into the Luna audio interface. The experienced producer Gunnar Innvær provided invaluable assistance throughout the session. 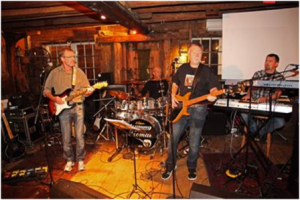 The band who acted as a guinea pig was “Larsen å di”, who plays 60’s rock and beat music, and who perform annually at the Bergen beat club events at Nøsteboden.  The band plays with a genuine 60’s flavour which I was hoping to capture on disk by doing a simple mix without over using effects and processors.

The musicians at that session  were Willy Berg Larsen, (drums), Magnus Monstad (guitar/vox), Finn Erik Pedersen (bass/vox) and Kjell Alvin Førlandsås  (guit/vox). I added keys later on a couple of the tracks. All in all a good learning experience to record the demo. The band shows that it has great vocal capabilities and a sound and style that suits the musical material they perform.

Take a listen to the tracks below!