In August 2010 we performed for the first time at a jazz festival. The Sildajazz festival is located in Haugesund on the west coast of Norway. The programme this year featured a great mixture of artists spanning from well known international artists such as Spyro Gyra, Lizz Wright and Hanne Boel, and Norwegian artists such as Solveig Slettahjell. Typically, a lot of less known bands performed from early evening until late at night in the many bars and cafes in the city centre, creating a atmosphere of music pouring out from everywhere. We were scheduled to play at the wine bar To Glass as the third band in succession. First band were Svein Olav Herstad trio, followed by a blues band.

We did a mix of Herbie Hancock and Wayne Shorter’s compositions in an acoustic line up. A few excerpts recorded on my minidisc worth mentoning  are: Dolphin dance – piano solo This is posted to be able to compare with all the previous recordings posted on this blog, dating back to the first rehearsal take made more than 2 years ago. This take may prove wether or not there have been an improvement in my solo approach.

Herbie Hancock’s tune Maiden voyage is always on our repertoire. It invites to modal playing and outside playing, and I believe this take represents several improvisation techniques that I have been developing over the last couple if years. 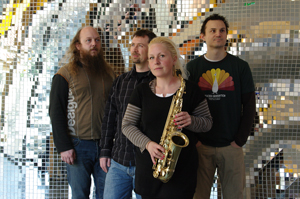 Fee-fi-fo-fum  by Wayne Shorter is always a challenge to play. The chord changes are quite unusual and requires some analysis to allow for smooth soloing lines. We have been checking out Roy Haynes trio’s version, which is superb, and found that we should try to play calmly with some coolness, not to stress the overall expression of the tune. I belive this version from Sildajazz is one of our more successful attempts.

Then, something new and unexpected happened as I entered the solo of Footprints – piano solo. Along  with our drummer Jan Tore Ness, I did some rhythmical improvisation, using cluster chord. So the piano solo opens with a rhytmical exchange.

Three bags full from Hancock’s debut album “Takin’ off” was done for the first time. I made a transcription of the chords, and melody and used Finale for notation. It is basically a blues in F, with some Suspended Quartal chords in the theme.

Thieves in the temple is Herbie Hancock’s version of the famous tune by Prince. I have spent a lot of time listening to Herbie’s solo on a bootleg “live in Cumbria” featuring Chris Potter on saxophone. It is hard to get close to Herbie’s incredibly funky playing style in this G-minor blues scheme.

Cantaloupe island was our encore. We have not done this live before. I did some close listening to Herbie’s solo on the live from Cumbria bootleg, and realised that the Db7 chord may also be played as a Db7 sus or H/Db, whereas the Dm7 chord can be played as a series of Dm7 | Em7/D | Dm7 | Em7/D which opens for some exciting colouring by doing the Em9 superimposed D, where the 9th is the major third of the underlying Dm7.